The below article was written by Katherine Spencer, Early Childhood Teacher at Cameron Park Preston.

At Cameron Park Preston we care about the environment, sustainability and the impact we humans have on this earth. We have embedded a culture of respect for the environment throughout the year and recently we have ‘dived’ into the ocean project.

This project started with a single idea from the children in the Collaborators Room: “We Love Our Earth”. Their Lead Educator Katherine followed this interest with passionate group times and hands-on small world play.

We discovered many of our friends visit the beach often with Ashleigh (aged four) telling everyone “The ocean where I want to swim in has to have turtles”. This sparked a flurry of excitement, we spent weeks talking about different animals in the ocean and learning from National Geographic about the plastics that hurt our animal friends.

As the weeks passed, the children became focused on plastic bag rubbish. They showed empathy and concern about the bags, Evie (aged four) told everyone “The bags are looking like jellyfish, so the turtles want to eat them”. As our group discussions progressed, we decided to take action about bags. The children’s confidence grew in identifying single-use vs reusable bags, with Jacob (aged four) telling his friends “The green bags are friends with turtles, they don’t look like food”.

When Educator Katherine received a letter in the mail from our local government about needing support for a bill to support the ban on single use plastics, our Collaborators and Researchers knew what to do. Educators Katherine, Kim, Brittany and Sustainability Officer Jaimee worked on a plan to have Service-wide discussions about our environment and invited every interested child to ‘sign’ the petition by signing the letter with their fingerprint and first name. Across the week, the Service was buzzing with social activism. The children interested in the animals showed empathy during their discussions and they were excited to help.

Anay (aged four) asked, “Am I helping the turtles? I want them to have the right lunch”. In the Researchers Room, the children were focused on making signs. They created a display in the foyer with wonderful artworks depicting their ideas. Brando (aged five) wrote “Ban the Bags” accompanying his picture of which bags are bad. Seerat (aged five) said, ‘My drawing is of people using plastic. We need to tell them to stop so that we can save the turtles”. Researchers Educator Brittany said, “These children show love for our Earth, they want to help all the animals and this long term project has been wonderful to see their theories grow.”

During our team meeting to discuss where this project is heading Katherine said, “This has been a wonderful opportunity for our Educators and children to foster our growing respect for the Earth, I am excited to see where our co-constructed theories take us next”. Educator Jaimee noted, “This project has been exciting for our Adventurers children, they are enthusiastic to learn more about their world”. Service Manager Ashton added, “It’s so important that we start educating children from a young age that our planet is important and that we have the responsibility to take care of it.”

We know this project has sparked the children’s thinking and their growing empathy is heart-warming for Educators to be a part of. We look forward to hearing back from the Environment Minister Matt Kean about petition hopefully and making progress on the bag ban.

Spotlight On: Melanie Afford, Educator of the Year 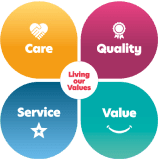